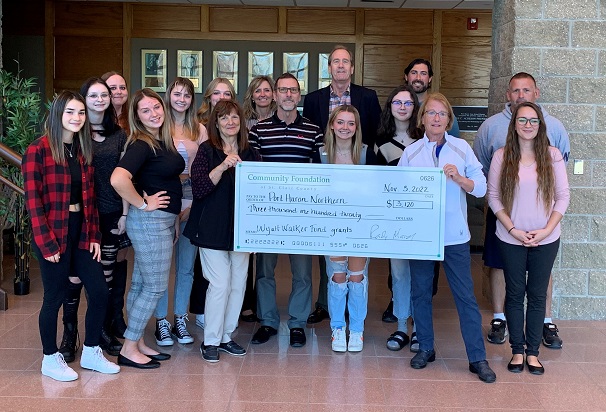 Famous football player Eddie Kennison once said, “When opportunity presents itself don’t be afraid to go after it,” and that’s just what the students at Port Huron Northern High School (PHN) did this school year. Grants from the Wyatt Walker Friendship Fund at the Community Foundation made it possible for four different clubs at PHN to pursue opportunities and continue activities within their school and community.

The programs and clubs of PHN are beyond grateful for these opportunities. Cassidy Middleton, a student at PHN and founder of PHN at PHN, is excited to be able to bring the Period Hygiene Network to other areas of the district. Cassidy describes what the network has done as a result of the grant, as they attempt to destigmatize the menstrual cycle: “We have fully expanded at Holland Woods, began a trial program at Fort Gratiot Middle School, and are supplying 3 elementary schools.” Additionally, Cassidy and her associates have started building Period Emergency Resource Kits for the six schools participating in the program.

In cooperation with PHN’s special needs class, the grant given to the Make a Difference Club allows the carrying on of special moments and activities for PHN’s students with disabilities. Planning the annual special needs prom, gingerbread house competition, and continuing lunch buddies are all items on the Make A Difference Club’s agenda, says Gracelynne Barrett, president of the club.

Having received the Wyatt Walker Grant in the past, the PHN Book Club is excited to continue providing books for students who are unable to afford them. “Some of our main goals are to provide a continuous safe space to discuss characters, make reading recommendations, and share a love for books,” says Ashley Nisbett, advisor of the club. Books purchased with grant funds are usually donated to the school library or placed in English classes for other students to access once completed.

Additionally, the Wyatt Walker Grant allowed for t-shirts, equipment, and food to be bought for the school’s flag football team. As a result, “Northern’s flag football team secured a victory,” said Andrew Roman, the coach for the team. Likewise, participant Hayden Prone was enthusiastic about his team and their achievements.

The Wyatt Walker Friendship Fund was created in 1999 in honor of Wyatt Christopher Walker to support student programs, projects, and initiatives at PHN, Wyatt’s former school. To learn more about Wyatt’s fund or others like it, visit stclairfoundation.org/funds.