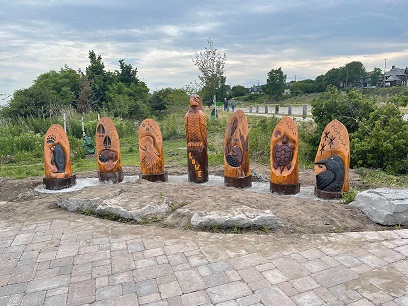 From The Times Herald

These are the Seven Grandfather Teachings, part of Native American culture with roots dating back to the beginning of time, according to the Nottawaseppi Huron Band of the Potawatomi.

And they’re also represented by the newest artwork on the Blue Water River Walk, Seven Grandfather Teachings, which was initially installed last week and finished on Monday.

“It is very important to keep all 7 grandfather teachings in your heart apply these teachings every day with all those around you,” Garrett Nahdee, a member of the Ojibway tribe of Walpole Island First Nation and the artwork’s creator said in an email. “Our time is short and precious, so keep it honest and always make your choices out of love.”

Seven Grandfather Teachings sits on the Blue Water River Walk near the U.S. flag and patio, south of another public art piece, Sugar the Iron Horse.

Bringing Seven Grandfather Teachings to the community was part of the Blue Water River Walk Native American Art Project, a collaboration between the community foundation and community members.

“Since the inception of the Blue Water River Walk, the Community Foundation planned to honor Native Americans along the trail,” board chair Randa Jundi-Samman said in an email. “The first art piece was an eagle petroglyph by artist Kevin Sudeith and now we have the addition of the beautiful carvings of the seven grandfather teachings.”

A Native American Art Recommendation Task Force was assembled for the project, which included Josh Whiting, Blue Water Indigenous Alliance chairperson and member of Wendat of Anderdon Nation in Detroit.

He said they chose to bring Seven Grandfather Teachings to the community because it’s a pretty universal language or code that speaks to all people. It is both a sightseeing opportunity and expands the diversity and inclusionary perspective in the area. Whiting said he hopes the artwork stands the test of time and represents “the pillars of the community.”

“It’s going to serve as a foundation for generations to come,” he said.

Kevin Totty, a community foundation program coordinator, said the artwork’s foundation is celebrating Native American culture, but it also creates a safe place for people to be themselves.

The artwork helps give people a voice and feel free to speak and collaborate, he said.

Of the seven lessons, the one that speaks to him the most is the eagle, which represents love and “soars above everything.”

Nahdee said he wanted to be part of this project so he could share his culture and the teachings of his ancestors that have been passed on many generations.

Please join us at the site of the artwork along the Blue Water River Walk on July 25, 2021 at noon for the dedication ceremony.