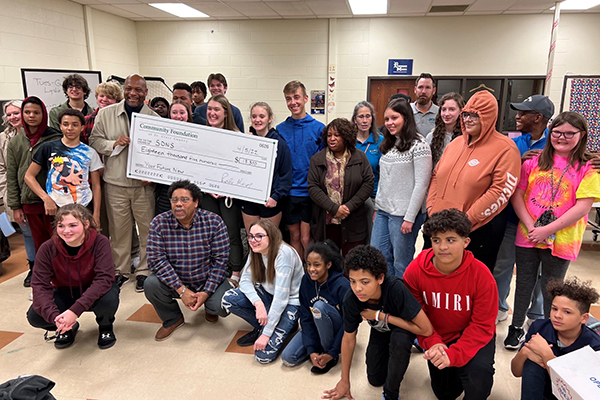 As Saving Our Neighborhoods & Streets (SONS Outreach) celebrates its 30th anniversary this year, it also recognizes a long history of collaboration with Community Foundation.

“We are so happy to be celebrating SONS’ 30 years of serving the youth of our community,” said SONS board President Jeff Kaczperski. “The impact and longevity of SONS is rare among nonprofits and it’s made possible by the support of committed partners like the Community Foundation who have walked side by side with SONS for decades. The Community Foundation has graciously provided financial support, training opportunities and advice to help SONS be successful today and into the future.”

The Foundation’s grant history with SONS starts in 1996 and totals over $265,255 in support over the years, with multiple funds giving out multiple types of grants to the faith-based nonprofit organization.

Founded in 1992, SONS is committed to the social development, academic excellence and spiritual growth of St. Clair County’s at-risk urban youth through purposeful relationships and structured programming, its website states.

“Our first encounter with the Community Foundation was years ago with their director Jack Peattie at the time,” said SONS Executive Director Tyrone Burrell.

He said that Peattie helped SONS get its first building with a matching $12,500 grant from the Youth Advisory Council Fund. Through that, SONS was able to make a down payment on its first outreach center at 26th and Vanness streets.

“Community Foundation would go on to help us with many different vans, transportation for kids, support with our Dream Camp program, our Talented Tenth leadership development program, sports and after school programs,” he said. “So they have been there for us for almost 30 years. And, of course, from Jack to (Community Foundation President and CEO Randy Maiers), the council and their advocacy for our programs and invitation for us to write for grants has been outstanding.”

SONS got its start when Burrell, who was a firefighter for the city of Port Huron at the time, felt called to the local high school. He told students at the school that he would establish a basketball league, but realized he did not have the funds to do so, and so ultimately decided to start an organization.

“Along with basketball, we do flag football, we do summer Dream Camp for elementary kids, the Talented Tenth leadership development program, … Manhood and Sister Circle mentoring for boys and girls,” Burrell said. “Our current program is Your Future Now, which takes place at the Harrison Center Monday through Thursday during the school year, exposing kids to trades and vocations.”

American Natural Resources was an early Community Foundation fund to support SONS, giving $6,250 in grants from 1996 to 1998 for SONS to purchase tents, to help with weekly activities and to help purchase a sound system.

“We’re definitely a funder that believes in all the things that SONS incorporates into improving the life of young adults,” said Donna Niester, of the Acheson Foundation and fund.

She said that the Acheson Foundation has been involved with SONS almost since the organization’s inception.

“We saw Tyrone Burrell doing some things in the community and our focus is the south side of Port Huron, which is where SONS originated and saw a lot of their participation,” she said.

She said her favorite story with SONS is when the Acheson Foundation decided to surprise Burrell with a new van.

SONS started its own endowment fund with the Community Foundation through EMCF in 2011. The EMCF Fund is a field of interest fund created in 2012 to support specific Christian-based organizations in St. Clair County (as may be determined from time-to-time by the EMCF Executive Committee) and other programs, projects or organizations within the Christian community as may be determined by the EMCF Executive Committee.

SONS will host a 30-year anniversary banquet on May 19 at Alexander’s in Marysville, in which eight of its alumni will be speakers.

“It’ll be a good time to reflect back, but also look forward to the next 30 years,” Burrell said.

He said that he is grateful for his wife being by his side over the years. He also noted that there are people that participated in SONS that return as staff or volunteers and now have their children participating in the program. He said he can hardly go anywhere without speaking to someone that played a part in SONS or know someone in the SONS program. “We’re a big family and there’s a lot of excitement,” he said.