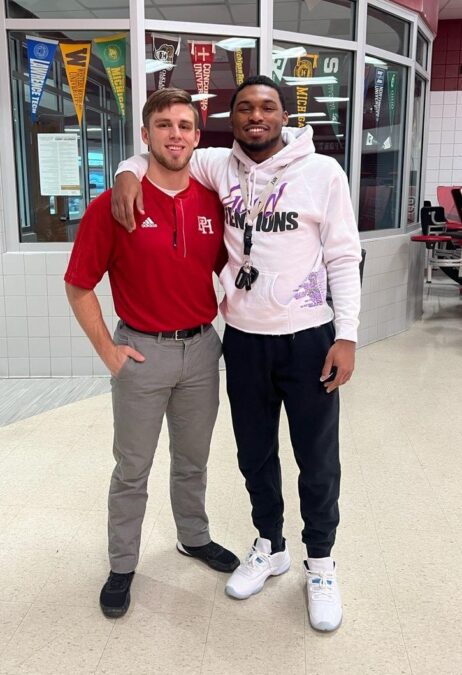 It was a message that hit close to home for the former Big Red, as he knows firsthand the power of a positive attitude and having someone who cares.  Miller is currently a freshman at Oakland University, thanks to scholarships from the Community Foundation’s James Wilhelm Memorial Scholarship and Little Brothers, Little Sisters Scholarship Funds, as well as scholarships from Oakland. Scholarships that he said he never would have even considered applying for if it weren’t for Port Huron High School College Adviser Brandon Wardlow.

“I would not be where I am now if it weren’t for him,” Miller said. “I wasn’t going to go to college. I figured I’m about to be somebody just stuck in Port Huron for life.”

Miller came to Port Huron from Chicago when he was five. It was a move his family made to provide a safer environment for him and his older sister.

“I lived on the south side of Chicago, it wasn’t a good place for us to be, a lot of bad things happening” Miller said. It was also where his uncle was murdered when he was just a toddler.

He transferred to Woodrow Wilson Elementary, into Mrs. Seely’s kindergarten class. He went on to finish at Woodrow and then attended Central Middle School where he ran into problems with some classmates that got him into trouble.

After getting expelled in 8th grade, and having to complete alternative classes in order for the school district to even consider allowing him to come back for high school, he was only two months into his freshman year at PHHS when his mother passed away unexpectedly.

“My life changed as I knew it,” said Miller. “I became responsible for things I used to take for granted, at such an early age.”

Shortly after his mother’s death he moved in with his grandmother. She helped him to recover stolen funds from his mother’s death benefits and stay focused on his responsibilities. “My granny and my mom taught me to keep pushing forward no matter what,” said Miller. “They would always be like if there’s a way around it, we’re going to find it.”

And so he did. He struggled in some of his high school classes and had to take online classes along the way to complete his credits. Determined to succeed, Miller worked hard and improved each year until graduation, earning a 4.2 GPA his senior year, even with two AP classes and while lettering in football and track.

But despite his hard work, he didn’t think he could go to college. “I figured there was no way I was getting into college. But Brandon kept on me. He kept telling me to apply anyway… ‘just trust me’ he would say. So I did. And then I got accepted to four schools! I couldn’t believe it. So then I applied for a few more that I wanted to go to and that’s when I got into Oakland.”

“Robb is a prime example of a kid who needed to hear ‘you got this, you can do it’,” Wardlow said. “Someone needing those positive consistent words in their ear, who are willing to trust the process and stick it out. Building that trust with him was key in getting him to understand I wasn’t just ‘doing my job’ I really was there to help him.”

Getting accepted was only the first step, though. Miller still didn’t think college was in the cards for him.

“College is expensive,’ Miller said. “I looked at it as something I just didn’t have the money for so I’d have to figure out another path.”

Then Wardlow encouraged him to apply for scholarships, telling him he could get financial help to cover the costs. He told Miller about the Foundation’s scholarship portal and how he could potentially apply for dozens of scholarships with just one application.

But Miller was skeptical. “My overall GPA wasn’t that good,” he said. “And I couldn’t take the SAT test because of COVID. I thought there was no way I would get a scholarship, so why even try? But Brandon pulled me out of class and sat me down and told me I needed to do it. He told me to write about my situation in my essays. He never gave up on me. So I just trusted him and I did it.”

Still, he wasn’t expecting to actually be awarded anything. So when he heard his name called at PHHS’s awards assembly and it was announced that he had received not one, but FOUR scholarships, Miller was stunned.

But his college advisor wasn’t surprised. “He is such a great kid, he’s really going to go places in life,” Wardlow said. “He already has everything he needs to be successful, he just needed someone to believe in him and encourage him.”

Another person who wasn’t surprised by his success was his kindergarten teacher, Teresa Seely.

It was the same Mrs. Seely who sat in the library at Indian Woods 13 years later and listened as Miller read aloud to her current students for Monday’s MLK event.

Now teaching second grade at Indian Woods, Mrs. Seely shared memories of Miller with her students, telling them how much he had loved to read in her class all those years ago. “He absolutely loved to learn new things,” Seely said. “He was incredibly bright and a very quick learner.”

Seely was thrilled to see Miller come full circle and have her former student share lessons with her current class. “I am so proud of Robb and the fine young man he is becoming,” she said. “I am looking forward to hearing all of the fantastic things that will come his way as he enters adulthood. I know that his hard work and dedication will surely pay off in the future.”

It’s something Miller is learning to believe in as well. He’s grateful for his mom, his granny, his kindergarten teacher, his high school adviser and all the others along the way that helped get him to where he is now. And for the financial support that helped make his dreams a reality.

Though he still has a long road ahead of him, he’s already looking forward to the day he can give back.

“Where would I be without those people… without those scholarships?” Miller said as he walked down the halls of the Community Foundation, running his fingers over the names written on the plaques along the donor wall. “I’m going to be on this wall one day.”