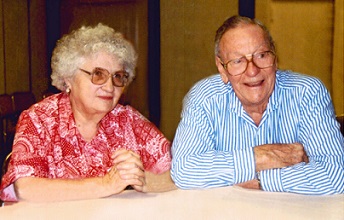 The two foundations have a combined total of more than 75 scholarship funds. Our scholarship donors are as varied as the awards they represent, but they all have one thing in common: they believe every student should have the opportunity to achieve their educational dreams.

Some of our donors, like the Gossman family, have a particular interest in supporting students attending St. Clair County Community College.

Established by Mr. Gossman’s children in 1996 in honor of him receiving the “Veteran of the Year” award from the St. Clair County Allied Veterans Council, the Charles Myron & Betty Gossman Veterans Fund helps honorably discharged veterans and their children pursue a degree at SC4.

Robert and Marilyn Kovach also help students attend SC4. Yale alumni and high school sweethearts, the couple has been funding scholarships for Yale High School graduating seniors attending SC4 since 1983.
In 2008 they established the Robert & Marilyn Kovach Endowment Fund at the Community Foundation to continue this scholarship into perpetuity.

The Kovaches and Gossmans, like our many other scholarship fund donors, hope these scholarships make a positive difference in the lives of local college students.