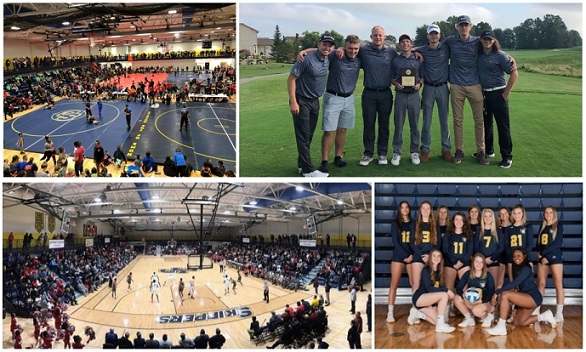 Fall semester is in full swing, and the SC4 Foundation has awarded $150,700 in scholarships for the academic year. More than 20 student athletes received over $44,000 in support, with $37,500 of that going toward SC4’s direct recruiting efforts.

“Beyond their passion for a sport, student athletes use scholarships to help them earn a degree or credits that will transfer to a 4 year university,” said Harold Burns, board chair of the SC4 Foundation. “They know that an education is important and we’re proud to be able to support SC4 college athletes.”

One lucky student is sophomore Jack Demara, a two-sport athlete who plays golf and wrestling.

He received scholarships from both the Ellen Kean Fund and Linda Pressprich DeLuca Endowment Fund for a total of $2,800.

Demara is the first student to receive the Linda Pressprich Deluca scholarship, which is for sophomore students pursuing a degree in elementary education.

“I love working with children, so it would be a privilege to teach elementary students,” Demara said. “After a couple years of teaching, I might go back to school to get my master’s degree so I can work as an administrator at a school.”

After finishing his associate degree at SC4, Demara plans on transferring to Saginaw Valley State University.

Demara keeps busy around campus. In addition to maintaining a 4.0 GPA and participating on the two teams, he is also a resident assistant at the SC4 College Housing.

His efforts haven’t gone unnoticed. He was recently named to the MCCAA all-conference team for golf, as well as a 2018-19 NJCAA All-Academic First Team Award Winner.

Another student-athlete to benefit from SC4 Foundation scholarship support is freshman Cameron Hudson. He plays on the men’s basketball team.

Hudson didn’t hesitate when it came to signing the athletic agreement for SC4.

“This scholarship means that the whole SC4 organization sees something great in me that will help them and me in the long run,” Hudson said.

Included as part of his agreement is $1,700 from the SC4 Foundation’s Theron & Eleanor Godbold Endowment Fund.

He feels SC4 is right for the next chapter in his life “because it has all the tools and methods I need to be a man on the court and off,” he said. “But other reasons are the people, campus, food and especially the St. Clair River. The water is one my favorite parts of SC4.”

Hailing from Detroit, he acknowledges it can be hard to turn nothing into something there but credits all the people who have been in his corner since he started playing basketball, a game he picked up when he was 7 years old, for keeping him on the right path.

He currently majors in communications, but is thinking about switching to business next semester.

His goals for his first year at SC4 include maintaining a 3.5 GPA or higher, and winning Freshman of the Year.