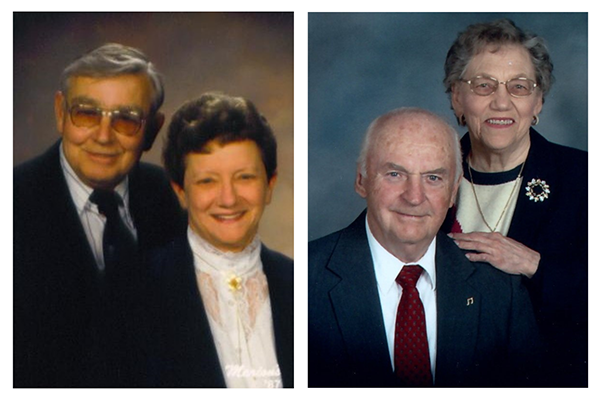 “They were all such strong, selfless and caring role models,” said Martha, who met Dan at SC4 before they both transferred to Michigan State University. “They were committed to advancing the well-being of others within the Blue Water area. These scholarships and grants honor their work and ‘pay-it-forward’ commitment to others.”

Martha’s mother, Therese, was the youngest of 11 children from the east side of Detroit, who became a devoted mother of six, a registered nurse, and an environmental and public health activist, finishing her career as a clinical nursing instructor at SC4. Her father, Maurice was altruistic and driven, attended Assumption College in Windsor, Ontario after high school, served in the Navy during WWII, then finished his bachelor’s degree from Assumption after the war. After early jobs in the Fenton area, Maurice started working as a teacher. He taught middle school mathematics in Detroit and Port Huron schools for almost 35 years, served as supervisor of Fort Gratiot Township for eight years in the 1980s, and was active in the Society of St Vincent de Paul for decades.

Eileen Fredendall, born in Port Huron, was a committed mother of nine, a registered nurse and a community volunteer. Dan’s father, Lawrence, came to Port Huron from Iowa after high school. He served in the Army Air Corps during WWII and was the first in his family line to go to college. After marrying Eileen, he earned an associate degree from Port Huron Junior College (SC4) under the GI Bill while working full time. An entrepreneur, Lawrence owned or managed a variety of businesses and finished his career with Serve-All Appliance. He was most proud of his work with the Society of St. Vincent de Paul, including revitalizing the stores in the greater metro Detroit area, and was instrumental in launching the Blue Water Community Food Depot.

Their parents had similar backgrounds and experiences and, unbeknownst to Martha and Dan, they knew each other before Martha and Dan met. Both mothers attended three-year, hospital-based nursing degree programs as United States Cadet Nurse Corps, finishing just after WWII ended. Their fathers were both involved at their parish churches in community outreach and knew each other through their work with the Society of St. Vincent de Paul.

“They all poured themselves out to others,” Dan said. “Whether that was in the hospital, the classroom, taking someone into their home, or in the community, they gave others the best of themselves, even when it may have been difficult. There was always someone else who needed more and they helped provide it.”

By creating these scholarships and grants through the SC4 Foundation held at the Community Foundation of St. Clair County, Martha and Dan are following in their parents’ footsteps and encouraging future generations to do the same. They both recognize that community college is an important bridge for many students to make the transition between high school graduation and success in a bachelor’s degree at the university level, particularly for a first-generation college student.

The Therese A. Foley Student Assistance Fund and the Eileen M. and Lawrence D. Fredendall Scholarship Fund will be awarded in perpetuity to SC4 students pursuing nursing or a STEM-related program. The grants will support access to missions at the Challenger Learning Center at SC4 as well as potential tuition assistance for disadvantaged students, Skip’s Corner Pantry support, ad hoc student assistance for one-time unanticipated events or housing support.

“We are beyond grateful to Martha and Dan for their generous support,” said Dr. Deborah A. Snyder, SC4 president. “It’s clear Martha and Dan’s parents were incredible individuals and role models for their families and communities. Thanks to their parents’ example, they are now doing the same for a whole new generation of students. The impact of their parents’ lives and work will continue to be felt for years to come.”

Community Foundation Vice President Jackie Hanton added, “Martha and Dan were thoughtful and impact-driven with their major gift. They were able to make a bigger impact on future students because they gifted stock. When appreciated stock is gifted, the donors do not have to pay capital gains tax. It is truly a win-win that will have lasting implications in the lives of so many future students.”

Dan and Martha recently visited SC4’s campus and reflected on their and Therese’s time there.

“That’s the first time we’ve been back to campus in a long time,” Martha said. “Back when Therese taught Nursing at the College, they learned by way of practicing on each other. She would be astonished and thrilled to see the technology and spaces in the Health Sciences Building. It’s an impressive facility.”