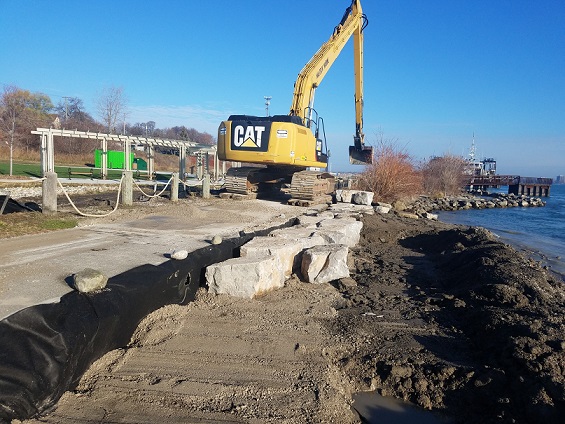 Recent gifts totaling more than $150,000 are supporting the most significant restoration and protection work on the Blue Water River Walk since it opened in 2014.

“We’ve been incredibly fortunate to receive major grants from the Ralph C. Wilson Jr. Foundation and the Ralph C. Wilson Jr. Trails Maintenance Fund at the Community Foundation for Southeast Michigan,” said Bill Butler, Board Chair for the Blue Water Land Fund which owns the River Walk.  “We’ve also been blessed by other significant gifts from local private donors and the Michigan Trails and Greenway Alliance,” he added.

Work is expected to last much of December and is meant to address the continued threats to the Bridge to Bay Trail, which runs along the St. Clair River, and has seen significant damage due to rising water levels.  According to Randy Maiers, Foundation CEO who is overseeing the work, “This section of the Bridge to Bay Trail is one of the most popular and widely used routes, and it’s in serious danger of being eroded away.”

The Foundation hired consultant Pam Blough along with the local firm of BMJ Engineers to design this round of trail and shoreline protection work.

“The Community Foundation has spent almost a decade owning and developing the Blue Water River Walk,” added Butler.  “It’s truly one of our most significant legacy gifts to the region and we’re thankful for the continued generosity of our friends, partners and donors who are making this work possible.”