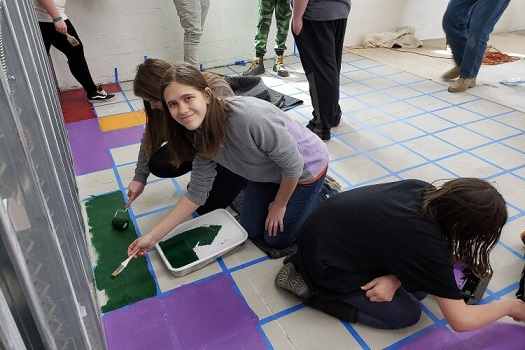 That is when Marine City’s River Rec Teen Zone (RRTZ), the brainchild of then-troubled teenager Kyle Pond, will have a soft grand opening.

According to its mission, “RRTZ will provide youth a safe, inclusive environment that offers life-enriching programs. Through RRTZ, teens will cultivate skills that will empower them to become leaders in their community.”

The teen-driven center, which is located in the newly-remodeled former City Hall, will offer programs like Exploring Careers; Healthy Mind, Healthy Body; and the Tech Zone, a hands-on space where students can work on honing their creative technical skills.

Other gathering spaces include a café, Zen space, gaming area, an art zone and more.

Pond was kicked out of high school and ended up on probation. While he was a student at an alternative high school, he flourished.

One particular assignment got his creative juices flowing, and he soon had the idea for an inclusive teen zone where other students like him could have a space of their own.

He put a questionnaire together that he distributed to local middle and high schools, and what had started as a class project quickly turned into a community effort.

Chairwoman of the board, Laura Scaccia, says everyone involved in the project is excited about the RRTZ finally coming together.

“We’re really excited,” says Scaccia. “This is three years in the making, and it’s Kyle’s vision. I don’t think he thought it would come to fruition.”

She says they have had many obstacles, from losing beloved board member and co-founder Gary Kohs, to securing commitments from contractors, but that support and hard work of everyone, including the kids, has been outstanding.

“It’s awesome,” she says. “The kids have been so involved.”

Scaccia also lauds the city and other supporters. “The city has been great, and we’ve had the Patronicity and Michigan Economic Development Corporation (MEDC) grants, which is wonderful.”

The Community Foundation of St. Clair’s Youth Advisory Council gave RRTZ $5,000 for its Tech Zone and matched that with another $5,000 for its Exploring Careers Zone.

“One of the YAC’s priorities is school life, which concerns all aspects of education including bullying, violence in schools, life skills, and college or career pathways,” says YAC President Andrew Touma. “The Tech Zone and the Exploring Careers Zone of the River Rec Teen Zone checked multiple boxes within this specific priority. These programs were important for the YAC to fund because they empowered potentially at-risk youth with career and technical knowledge that could prove to be revolutionary in their lives.”

RRTZ is still taking donations and has a wishlist at https://riverrecteenzone.org/donate .

Teens ages 12-18 from all over St. Clair County—not just Marine City—will be able to utilize the center.

Scaccia says that those kids will “have a safe place to feel accepted, help their confidence, give them mentors—a support system outside of their family, get them off of the streets and in an inclusive environment.”

She says they want to work with teachers in the school to create other programs like “Wellness Wednesdays, which teaches them basic things like sewing on a button, nutrition—things that will be useful in their lives, not just in school.”

The center is located at 300 Broadway in Marine City and the soft opening will start at 7 p.m. The teen zone’s hours will be 2:30-7 p.m. Monday through Friday, but as it expands, that could change.

“Gary Kohs used to always tell the teens that if you can dream it, you can live it,” says Scaccia. “Kyle always remembers these words.”