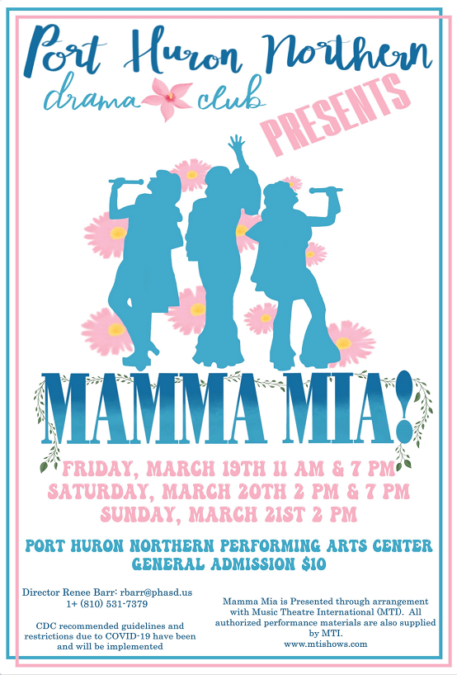 Despite setbacks and obstacles brought on by the pandemic, Port Huron Northern High School’s Drama Club is ready to debut their spring musical next week. This year’s production, Mamma Mia!, is happening thanks in part to a $5,000 grant from the Foundation’s Youth Advisory Council (YAC).

From the PHN Drama Club

The Port Huron Northern Drama Club has been putting on high-quality performances for several years. As an almost entirely student-led organization, the Club has been able to engage audiences within the community by consistently producing two shows per year.

But a week before the spring 2020 production of Big Fish, Port Huron schools were shut down. As a result, the show was cancelled.

“Unfortunately, the COVID-19 crisis interrupted our rhythm,” said Renee Barr, theatre coordinator and the show’s director. “After putting months of hard work and love into the musical, the sudden news of cancellation of our passion left our members devastated and the lack of plans for rescheduling left us without closure.”

The shows remained cancelled throughout the rest of the school year and well into the fall of this year. But the members remained hopeful and determined. “Once we reconvened after winter break, we knew we were going to put on a show no matter what obstacles we had to overcome,” said Drama Club President and Student Director Ben Adair.

“Our most significant struggle was our finances,” said Sylvia Stephens, Drama Club vice president. “The Drama Club is self-funded, which means we only strive to make enough money to fund our next show.”

Due to this, the cancellation of Big Fish posed an extreme financial loss after already spending thousands of dollars on quality sets and costumes and losing all of the ticket sale income. This created the challenge of raising enough money to produce another show. Fundraising was one of the primary goals leading up to the performance, in order to pull off a successful production.

“One of our main financial supports was the St. Clair County YAC and their generous grant,” said Adair. “Supplemented by other grants and fundraising efforts, support from YAC allowed us to fund all of the sets, costumes, and personal protective equipment needed to put on a high-quality and safe show.”

Producing theatre in a pandemic is not an easy task. Group leaders began by transitioning to a virtual audition. “Auditions are where we are able to make first impressions with all of our new cast members, and trying to create this same connection virtually was difficult,” said Drama Club Student Producer Zak Kerhoulas. “Fortunately, we had a great turnout and everyone was understanding and excited to get back to making art together.”

Following the audition, began the in-person rehearsals. These also had to be adapted to fit the COVID-19 safety guidelines. Temperatures were taken at the beginning of every rehearsal, masks were strictly mandated, and social distancing was practiced.

Safety guidelines also had to be addressed for the audience members. As a result, the students developed a reserved ticketing system that accommodates the state-mandated limited capacity for indoor events.

“All of our members have really stepped up and committed themselves to making our organization adapt to the pandemic,” said Stage Manager Amelia Suiter.

After overcoming all these obstacles, the Port Huron Northern Drama Club is pleased to announce the spring production of Mamma Mia!

“We have poured our hearts and souls into this show, and we are excited to share it with the community,” said Adair. “In a year of so much fear and uncertainty, it has been amazing to provide an outlet for our members’ pent up creativity and to see each of them take so much pride in the art that we are creating together. Thank you again to the YAC for supporting our organization and making this performance possible!”

YAC is comprised of local students representing high schools from throughout the county empowered to create positive role models for youth as philanthropists, assess local youth needs, review grant applications and advise the Community Foundation on youth grant awards. They are currently accepting grant applications and are focusing resources on their main priority areas of Mental Health, School Life, and Positive Lifestyles.

Learn more about YAC
Apply for a grant
Share