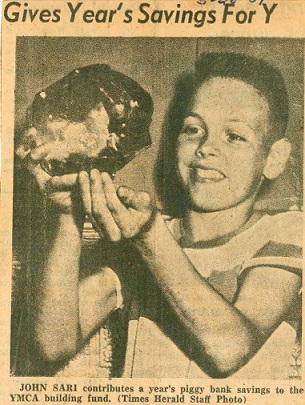 A Community in Need

On November 17th 1944, the U.S. was 5 years into World War II. The D-Day invasion of 155,000 Allied troops on the beaches of Normandy was only a few short months before. Gas was 21 cents a gallon and the average annual salary was $2,600. And at 8 p.m, in the office of Walsh, Walsh, O’Sullivan and Schlee, a group of enlightened civic and industrial leaders called the first meeting of the Port Huron District Foundation to order.

The purpose of their newly formed foundation was “to promote, encourage and aid in the benevolent, charitable, hospital, scientific, literary or educational organizations of the Port Huron area by holding – money or other properties in trust as may be acquired by will, gifts, or otherwise – and disbursing these fund for the capital improvement of such acquisitions – or for use in the general interest of charity, philanthropy or educational welfare.”

The depression of the 30’s and WWII had served to delay the building, expansion, or refurbishing of many necessary facilities in the area. There was pent-up demand and a sincere desire by several organizations to proceed with prior projects and, therefore, a real need for coordination. As Francis Kiefer pointed out:

“The need for a foundation was realized when it was discovered that many groups in Port Huron were planning overlapping projects for civic betterment. To have several organizations attempt to undertake these projects at the same time would result in confusion and an overburdening of financial supporters of such a project.”

Fast forward to July 26, 1955. Wilbur J. Norris stood before the National Conference on Government in Seattle, Washington and gave the speech of his life. What was this story that Norris told? What had Port Huron been up to since that night in 1944?

Norris began by setting the scene:

“We are not a rich community – as rich communities go. We have no rich uncles to build our civic facilities. Yet, we are wealthy – wealthy in that we have citizens who are willing to give freely and generously of their time and their hard-earned money – to build a better community.

In 1944, Port Huron needed everything – new schools, additional hospital facilities, a YMCA, stadium and sports area, more Boy and Girls Scout camping facilities, small boat harbors, an all purpose civic auditorium and even a new city-county building and jail. There was no end to what we DIDN”T HAVE.’

He then explained how citizens began to step up and approach industries to ask for gifts or even loans to contribute to these much-needed projects. They began to create momentum and inspiration. He told the jury that – “MORE AND MORE individuals and organizations were wondering – Why can’t our city have these things? Let’s have CITIZEN ACTION!”

But all these projects couldn’t be completed at the same time. They didn’t just need dollars, they needed leadership, organization and planning.

“Then the Port Huron District Foundation was formed as the vehicle – and with it, its creed – “TO MAKE A BETTER COMMUNITY IN WHICH TO LIVE FOR THIS AND GENERATIONS TO COME” Norris told them.

Memorial Recreation Park was the No. 1 project, as picked by local organizations and citizens. The subsequent public campaign raised $235, 497.96 from citizens, plus $130,533 from the Foundation for a total of $366, 030.96. That would be more than $5 MILLION in today’s dollars. The Park Project was completed and dedicated in 1949.

Next on the priority list was to raise a million dollars to help construct a 50 bed addition to the present Port Huron Hospital and a new 100 bed Mercy Hospital. Norris told them “The response truly amazed and delighted everyone. It was OVER- subscribed by $400,000 – the largest and most successful campaign ever conducted in our city’s history.”

Then in 1954, before the hospitals had even been officially dedicated, a successful campaign for the new YMCA building had been completed. The campaign not only succeeded in raising a total of $1,012,650 (more than $13 Million in today’s dollars!) it united a community:

“Yes, there were a few large gifts – the largest by far being $300,000 by one of our main industries,’ Norris said. “But the response from all walks of life was truly electrifying! If you weren’t a part of the drive, you felt “left out.”

An entire community contributed. Then 12 year old, John Sari, and his brothers and sisters saved 301 pennies over a year to contribute.

A Legacy of Cooperation and Contribution

Norris closed his speech in Seattle by declaring:

“WELL ladies and gentleman, perhaps the Freedom Bell has rung again – ALL citizens of our community are acting to benefit themselves and others by individual action – NOT by that of a Master State or Government.

As one of our clergy so aptly put it at the jubilant completion of the YMCA drive – ‘The Stubborn Ounces Of The Individual Citizen’s Weight Shall Be Felt For Freedom… And For Progress’.”

At its core, the Foundation is not a fundraiser. It inspires us to remember that even in the worst of times; our community has the BEST people… capable of amazing things when we all work together.

Our 13 founding Board members never imagined what the Foundation’s leadership, community vision and charitable contributions could do over the first 10 years, let alone the next 75.