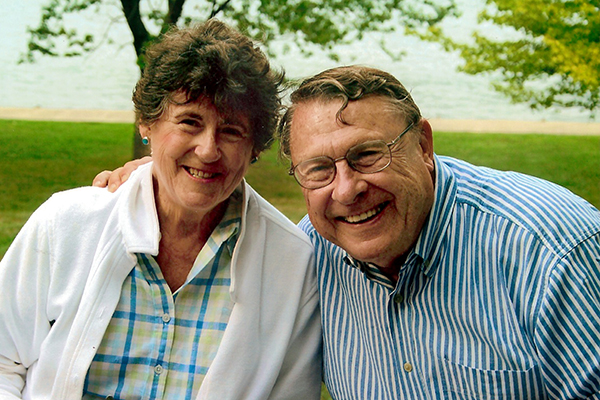 Through an endowed fund with the Community Foundation, donors such as Ernest and Barbara Oskin plan for the future by ensuring long-term support for the causes they care about most. Providing for the continued prosperity of St. Clair and the surrounding area is a priority for the Oskins, whose fund will contribute to the betterment of the community for generations to come.

The Ernest T. & Barbara A. Oskin Fund provides equal support for opportunities in the City of St. Clair, with a preference for beautification or education-related projects, and general charitable purposes at the discretion of the Community Foundation’s Board of Trustees.

Ernest Oskin, former owner of Huron Plastics, Inc. in St. Clair, and his wife, Barbara, established the fund in 1998. Over the years it has helped numerous organizations and projects such as St. Clair Little League Park, emergency service needs, park expansion and maintenance, educational programs and recreational opportunities.

The hanging flower baskets highlighting St. Clair’s boardwalk and downtown have frequently been supported by grants from the fund and have become one of the area’s signature attractions said Trice Hawkins, recreation director for the City of St. Clair.

“We recognize the importance that beautification plays in our city as far as improving the quality of life and helping with the vitality of our downtown area,” Hawkins said. “Palmer Park, which is a destination attraction for freighter viewing and the park itself, is also a location for many of our community events, so it just all ties in together. Whether it’s the art fair, Fourth of July or the boat races, having those hanging baskets there is just a nice extra touch and gives a great first impression for the city of St. Clair.”

Several grants have been awarded to the St. Clair Garden Club from this fund, including one recently that supported improvements to the Oasis Turnout at Palmer Park in St. Clair. Frequent complaints about the unsightly barren patches along the parking lot at the north end of the park led to the project, which helped beautify the space by installing brick pavers, irrigation, raised planters and benches.

“We knew that there was a need and that the community was unhappy with the look so it seemed like the perfect thing to take on,” said Diane Ives, chair of the project’s committee. “Without that grant, we wouldn’t have been able to move forward with the project at that time.”

Since it was established, nearly $945,000 has been granted from the fund to support initiatives in St. Clair and the surrounding Thumb Coast region.

“It’s a great partnership between the City and the Community Foundation that I think sets us apart from a lot of other communities that we’re able to have these flower beds, hanging baskets and different landscaped parks,” Hawkins said. “To know that these funds are out there, and that we’re carrying on a tradition too because these funds have been earmarked for beautification projects, we’re very glad that they’re available to us. They make a difference.”

We appreciate the foresight of the Oskins who have made a long-term investment through their endowed fund in the continuous enrichment of our community and its residents. To learn more about giving opportunities and other funds administered by the Community Foundation that are also making an impact, visit stclairfoundation.org/funds.