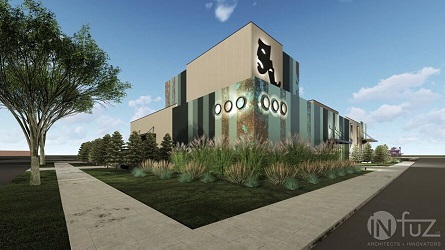 If Kathy Vertin has her way, the co-owner of the Snug and Riverbank theaters in Marine City will have her new 12,000 sq. ft., 350 seat theater open in downtown St. Clair by December 2022. She’d like to have it open in time for a Christmas production.

“I know that’s ambitious but you have to set ambitious goals to reach ambitious dreams,” Vertin says.

That ambitious dream was pushed one step further late last month as the board of the St. Clair Riverview Plaza unanimously approved the sale of a portion of their parking lot to Riverbank Theatre, the 501(c)(3) nonprofit organization the runs the Snug and Riverbank theaters, Riverbank Performing Arts Academy, and the yet-to-be-named but soon-to-be-built theater in St. Clair. The theater will be built on the southwest corner of the Plaza’s parking lot.

Vertin, who co-owns Riverbank with her husband Tom, expects to break ground later this year, she says, with the goal to open one year after the first shovels reach dirt.

“It’s so great that the Plaza board sees the benefit in having the theater there, and that it was a unanimous yes,” she says. “Now it’s full-on fundraising mode.”

At an estimated cost of $3 million to construct the new theater, the Riverbank organization is roughly two-thirds there. A patchwork of grants, endowments, and donations have so far been acquired, including a $1 million challenge grant from the Franklin H. and Nancy S. Moore Donor Advised Fund, a $500,000 match from the St. Clair Endowments of the Community Foundation of St. Clair County, and $300,000 from private donors.

The remaining $1 million to complete funding will be raised in a variety of ways, Vertin says, including potential grants from the Michigan Economic Development Corporation, fundraising events, and private donations. The theater, which has yet to select a name, could also sell its naming rights.

It’s worth the investment, asserts Vertin. Prior to COVID-19, the Riverbank organization hosted 20,000 guests over the course of 2019. An economic impact study by the Anderson Economic Group, commissioned by the Economic Development Alliance of St. Clair County, with support from the Community Foundation, found that construction of the theater would generate up to $2.4 million in net new economic impact, in the first year, and up to $11.5 million once fully established, after five years.

“The goal is: How do you use arts as a catalyst for economic impact? We tried with Snug and Riverbank and it worked really well. So let’s have another venue up in St. Clair and all of a sudden we become a two-day destination,” Vertin says. Her dream is for the Blue Water Area to become the stateside version of Stratford, Ontario, a destination town renowned for its live theater performances and festivals.

A new, larger theater would accomplish several things for the Riverbank organization. As it stands, demand for the performances at Riverbank and Snug means that successful productions result in dozens of shows. A larger theater would allow Riverbank to host the same amount of guests over a shorter period of time, easing the burden on the actors and crew who typically have day jobs in addition to their nightly performances.

It would also give the productions new levels of professionalism, building the infrastructure for greater sets, lighting, effects, and better seating. “There are a lot of opportunities to improve the theatrical experience,” Vertin says.

Fans of seeing theatrical productions in downtown Marine City need not worry, as the Riverbank and Snug theaters will remain in operation after the St. Clair theater has opened. Currently, the production of Now Comes the Fun Part! Life Begins at 50! has been extended through this weekend at Snug and Nunsense II: The Second Coming opens Friday, Aug. 6, at Riverbank Theatre and runs through Sept. 5.

“This is something we’ve been working on for a while,” Vertin says. “We want to expand the arts through the whole region.”