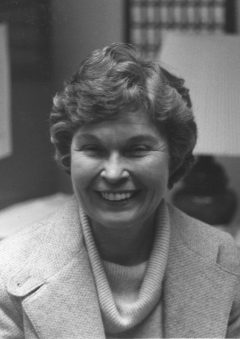 The Community Foundation and the City of St. Clair Library are excited to share the launch of the Marilyn Zweng Library Fund in memory of Dr. Marilyn Zweng.

“Marilyn was very proud of founding The Friends Book Club at our branch and was instrumental in starting the lecture series in St. Clair with a marked preference for author/book talks,” said Julie Alef, Branch Lead of the City of St. Clair Public Library.

The Zweng Library Fund was established after the St. Clair Library branch received a large planned gift through Zweng’s estate. As a favorite library branch for Zweng, the new endowed fund will provide ongoing support for things like the local book club, author visits, programming for children and general library programming.

Zweng was a supporter of the St Clair County Library Fund during her lifetime, using appreciated stocks to make gifts to the library fund as well as several other local charities and her alma matter Michigan State University. She was a modest person but a very impactful philanthropist over the years.

“We are very honored that Marilyn thought so much of our library and I’m delighted to work with the Community Foundation to build something wonderful in Marilyn’s memory. Perhaps, even engage more people who love our library to consider their own planned gift to this fund to support our branch,” said Alef.

Another leading example of Zweng’s lifetime philanthropy is the endowed graduate student award created in her name through Michigan State University that provides fellowships to two mathematics students each year. She was also an impactful philanthropist who supported not only the local library but many educational programs and programs like the free dental clinic through the United Way.

Zweng’s lifetime achievements in the mathematics profession and with her students, as well as her local impact on charities near and dear to her heart, will be thought of for lifetimes to come because of her thoughtful planning for lasting legacy gifts. Zweng will fondly be remembered for her generosity and making a positive difference for so many during her lifetime and well after.

The Community Foundation has experienced staff to help donors think through their options for planned giving. It does not require a large income or vast estate. Planned giving only requires a thoughtful intention to make a difference in your community. If you would like to consider creating a lasting legacy in your charitable plans please visit the Giving Center on the Community Foundation website.

The St. Clair Library, founded in 1869, began through the members of the Ladies Library Association. In 1967, the library became part of the St. Clair County Library System and moved to its current location on Second Street.