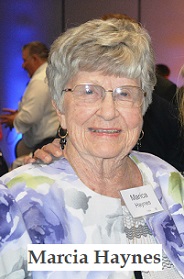 The age of big hair, computers, the World Wide Web and women entering the workforce in droves. Times were changing and the directors of the Port Huron District Foundation took notice – it was time for a rebirth.

“We realized that there was a need for new organizations and projects focused on community enrichment to have a resource that would help get them started,” recalls Marcia Haynes. “The work that had been done was tremendous in resurrecting brick and mortar projects, but we needed a foundation for the whole community.”

Just as the world was becoming more connected, the Foundation also expanded its reach. At the leadership of John Shier, who was elected in 1983, the Port Huron District Foundation transformed into the Community Foundation of St. Clair County to service the county as a whole with the aim of helping donors create an enduring legacy of philanthropy.

It was in this same era that the Foundation welcomed the first women, Marcia Haynes and Virginia Farmer, to serve on its board of directors since 1948* and surpassed $1,000,000 in permanent funds. But that was just the beginning.

At the turn of the decade, the focus was on sowing seeds. The first years of the 1990s were focused on educating donors and community members about the financial benefits of making charitable gifts through the Community Foundation. In the summer of 1994, Frank G. Andreoni was elected president of the Community Foundation and he was ready for the harvest.

Over the next six years, with America’s economy growing in the double digits, the Foundation’s message of improving the quality of life by meeting philanthropic objectives of the donors grew exponentially:

As the decade rounded out, the Foundation was thriving with a growing pool of donors and a permanent asset base of $18,000,000. The seeds planted then still shape the growth of the Foundation today.

Mrs. Walter Lambert from 1945-48, served in an officer role as assistant secretary
Mrs. Harold Marlette from 1945-46