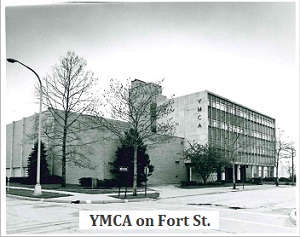 By the 1960’s, the Foundation was a significant thread in the fabric of community life. Thanks to the several major capital improvement projects led by the Foundation, the city of Port Huron was named as a runner-up in the All-America city competition sponsored by the National Municipal League.

The groundwork for partnership with the League of Catholic Women had also been laid in the previous decade and a plan for a “home away from home” for young women was born. By 1965, the construction of Marian Manor was complete to provide housing for women who were out of high school and attending college or employed full time.

The 1960’s also marked a time of significant contribution to Goodwill Industries to purchase a new building and to assist the Salvation Army in constructing a new building on Court St. Today, fifty plus years later, the Salvation Army still successfully operates from that same location. The medical landscape was also quickly changing which prompted the Joint Hospital Building Fund to raise more than $1.9 million dollars towards a total $8 million dollar expansion at both local hospitals.

As the 1970’s rolled around, it was finally time to take a step back and celebrate. In 30 years time, the list of major capital improvements were:

An address to the community in a 1974 Times Herald advertisement read, “We challenge any city in the country to match this record of civic improvement. What you have done has been an inspiration to the state and the nation. You have demonstrated what foresight, determination and understanding needs of others can accomplish (largely without government aid).”

Nearly all of the funds spent on the capital projects from the previous 30 years were raised within the community. The Officers and Directors of the Foundation at the time predicted a great future for the cooperative and progressive citizens of a fine community.