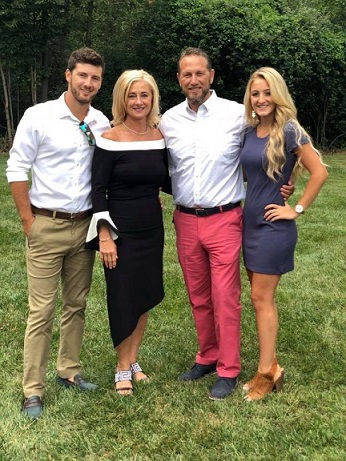 Donna Russell-Kuhr, President, CEO and Co-owner of PTM Corporation in Fair Haven, has inherited a strong legacy of philanthropy and generosity that she attributes to her mother and father’s lives.
“As a young girl, I saw my dad give the shoes off his feet to a man down on his luck. He walked him over to a restaurant, got him a burger, put some money in his pocket and gave him the shoes off his feet. As a young girl- that really impacted me.”

Now, a wife, mother, business owner and philanthropist herself, she’s hoping to emulate her parents’ legacy. Russell-Kuhr’s company has developed a non-profit that employees give to in order to help employees and community members when there is a need- much like the Community Foundation of St. Clair County, she feels. “The different roots they have in the community and the different avenues they have for all different reasons to help people- itʼs helping our community and that’s why I’ve become involved.” PTM Corporation, at the direction of Russell-Kuhr and her sisters, is also focused on giving to A Beautiful Me and the Blue Water Area Robotics Team, both financially and in time and resources. Aside from her philanthropic giving through PTM, Russell-Kuhr has become a staple of the community through her involvement on the Board of Directors with the EDA of St. Clair County, United Way and recently the Community Foundation.

Russell-Kuhr has been particularly involved in the Come Home Reverse Scholarship Committee, currently serving as the Chair. “I chose to be a part of this committee because I believe in it, it’s the first of its kind and it’s making a significant impact on young people’s lives.”

One of her favorite people she has learned from in her time at the Foundation is fellow committee member, Lezlynne Moore. “She is so bright and has a heart the size of Michigan.” It’s women like Moore, who Russell-Kuhr said highlight the need for diversity in gender, age, culture and more. “Itʼs important to have a good balance of men, women, old, young, ethnic backgrounds and cultures because the world is changing every day.” She feels it is important for women to fill these roles, because, “looking through a womanʼs glasses as we see the world, I think it complements philanthropy. Our voices need to be heard.”

To future generations, Donna wants both men and women to know that “everybody can give. If we all figured out one way to give- time, money, kindness- the world would be a different place.”