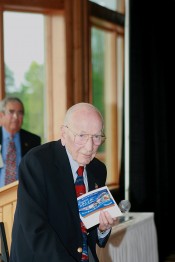 The John Shier Fund was created in 2009 through a gift from Jim Acheson to honor the memory of Mr. Shier.  This fund is a community priorties endowed fund.

Mr. Shier served as a Port Huron District (later the Community Foundation) Foundation Trustee from 1958 to 1985 and was elected President in 1984. He maintained a seat on the Foundation board until 2008. He was very active in other parts of the community as well.  He sat on the Board of Trustees of Mercy Hospital for 30 years and served as President from 1978 to 1984. He was a Director then President of the Board of the YMCA in Port Huron from 1955 to 1958 and was named a Life Member in 1988. He served other community organizations, including the Marydale Center for Seniors, Catholic Social Services, the Sanborn Home and the St. Clair County Community College Foundation Board of Directors. With four others he helped to found the Port Huron Minor Hockey Association and was involved in organization of the first Silver Stick Tournaments.

Mr. Shier was the recipient of a number of community service awards including the Community Foundation’s Distinguished Service Award in 2003. He was presented with the Spirit of Port Huron Civic achievement award in 1987 by the Port Huron City Council.  He was awarded the John R. Hogan Humanitarian award in 1997.  He also received Community Foundation’s 50-year service award in 2008.

Mr. Shier was a longstanding member of the Port Huron Golf Club and served as president in 1971. He and his wife, Louise, were longtime members of Formal Dance Club and he was a member of Blue Water Syndicate Investment Club. He also served on the board of the Michigan Seniors Golf Association and was a two term chairman of the membership committee. Both Mr. Shier and Louise were parishioners at St. Stephen Church as part of the Holy Trinity parish. Mr. Shier enjoyed his duties as a reader at Mass.