“Everyone seems to agree on this”: Southeast Michigan comes together to plan connected trails system

“Everyone seems to agree on this”: Southeast Michigan comes together to plan connected trails system 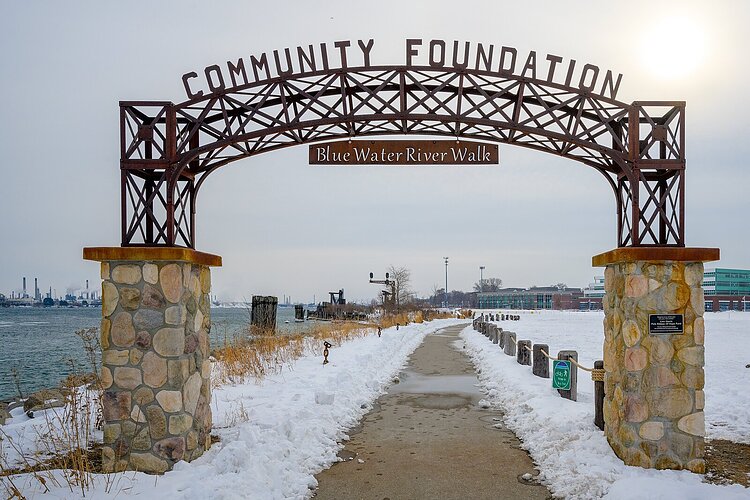 This article is part of Inside Our Outdoors, a series about Southeast Michigan’s connected parks, greenways, and trails and how they affect residents’ quality of life. It is made possible with funding from the Michigan Trails and Greenways Alliance.

In the ’90s, staff at the Washtenaw County Parks and Recreation Commission (WCPRC) conceived an ambitious idea for a 35-mile trail that would stretch between the county’s northern and eastern borders. But county staff quickly realized that they couldn’t do it alone.

“It really just became evident early on that we needed to have a lot of partners at the table if connectivity was our goal,” says Peter Sanderson, principal park planner and landscape architect for WCPRC. “Especially in a built-out environment, there’s not one organization that controls the land. Having partnerships to cross the land is almost the most important thing to be able to construct a trail.”

Over the past decade, that realization has caught on with park planners, government officials, nonprofits, and others across Southeast Michigan, who have increasingly collaborated to build trails and greenways that cross traditional jurisdictional boundaries. The mindset began with successful projects like Washtenaw County’s Border-to-Border (B2B) trail, which has added 20 miles to its originally planned route and is now nearly two-thirds complete. But the collaborative approach has broadened as stakeholders have adopted a more regional approach, thinking in terms of projects that build trail connections not just within a single county but across Southeast Michigan. 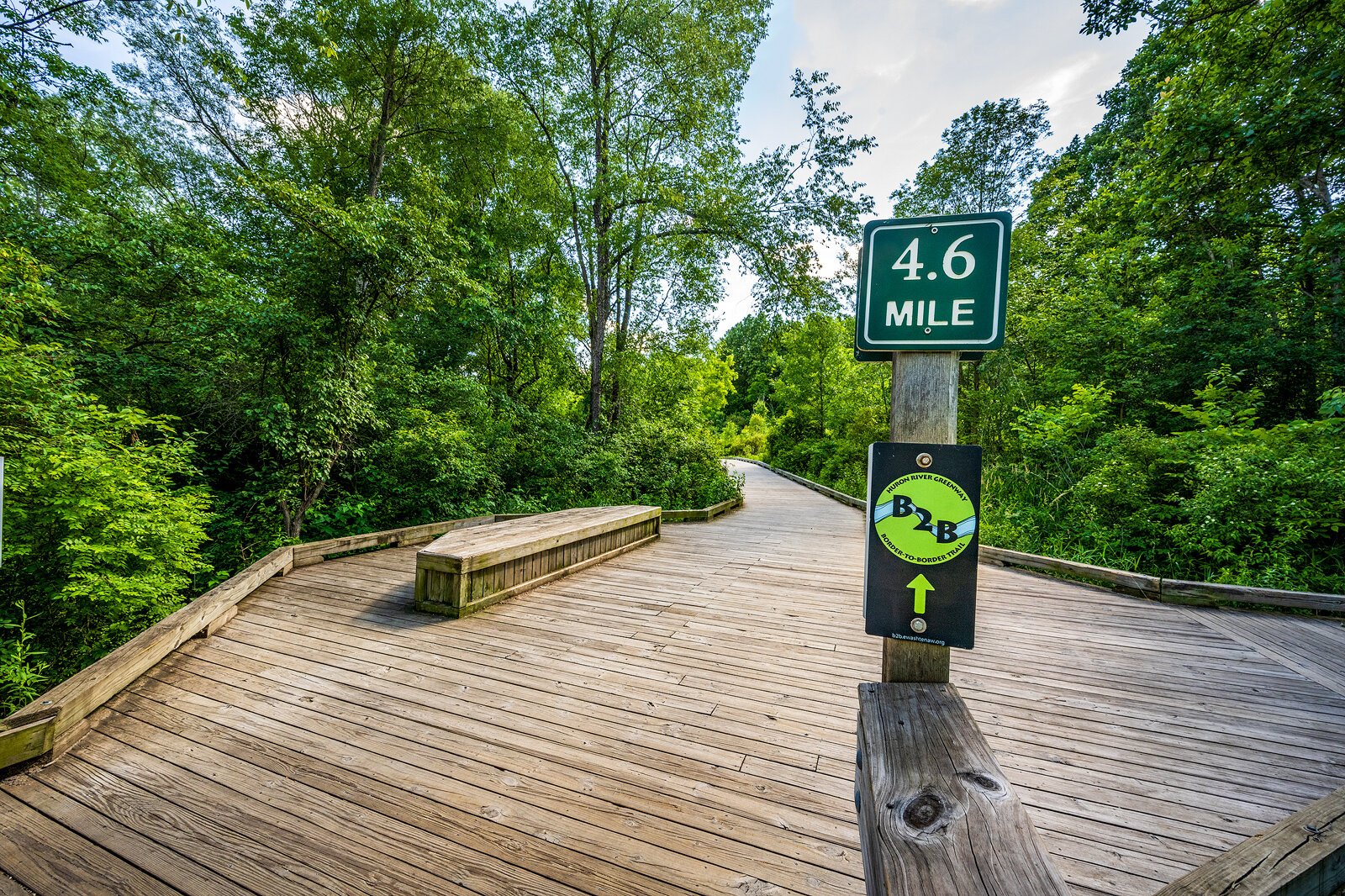 The B2B Trail between Dexter and Hudson Mills Metropark.

“I think there’s been this realization that we really all should work together because there’s other areas of the country that do this well, and we’re all doing this well individually, but we all could do it better if we work together,” Sanderson says.

The idea of building regional connections between public green spaces isn’t new. Early planning documents for the Huron Clinton Metroparks, dating back to the ’30s, envisioned a regional system of parks in Wayne, Oakland, Macomb, Washtenaw, and Livingston counties, connected by car-focused parkways. Some of those roads, like Metro Parkway in Harrison Township, were constructed and still exist, but the parkway plan largely fell by the wayside as freeways were constructed in Southeast Michigan.

Nina Kelly is chief of planning and development for the Huron Clinton Metroparks. She says that as public interest in trails and funding opportunities for them have grown in recent years, “it’s almost like we are retroactively realizing that connected vision, but with non-motorized connections this time.” 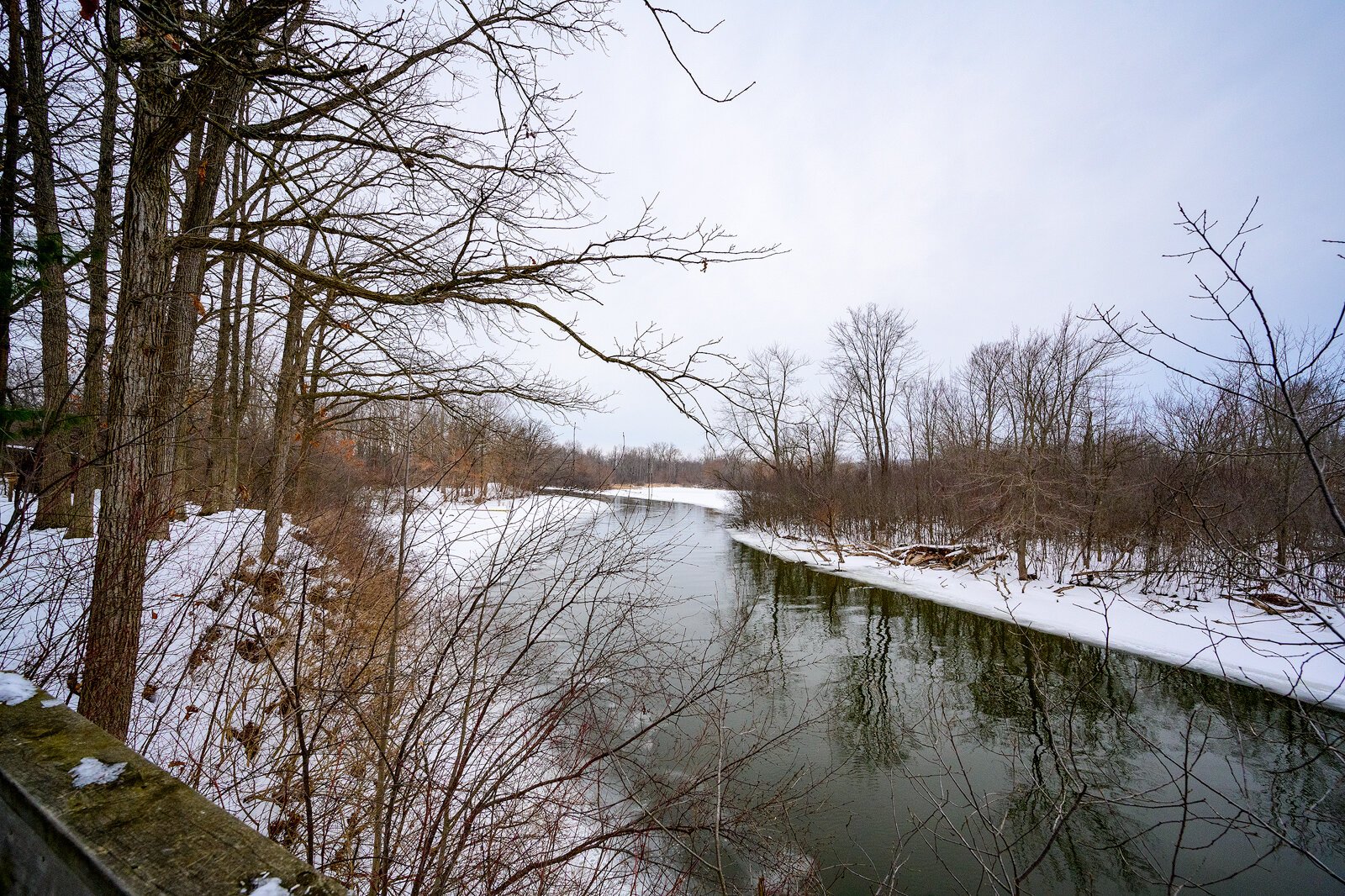 The Huron River in Oakwoods Metropark.

“Ideally, you’ll be able to kind of see almost like a retroactive greenbelt or a greenway belt or a trail connection circling around Metro Detroit and connecting into Metro Detroit, so we have the full circle,” she says. 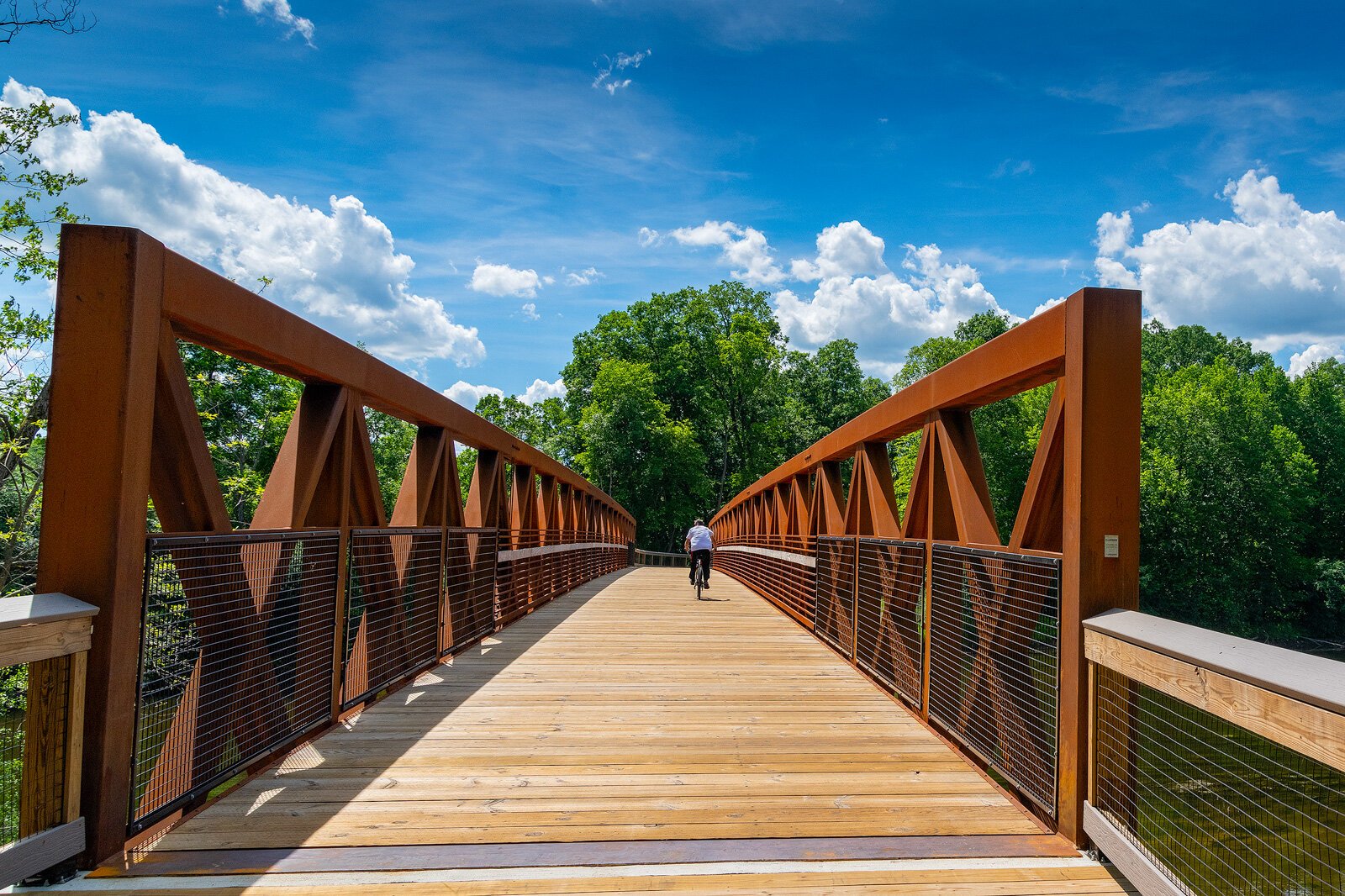 A new segment of the B2B Trail off Huron River Drive in Dexter.

Interest in connectivity between Southeast Michigan parks and trails isn’t limited to Metro Detroit or the Metroparks system. In St. Clair County, numerous community stakeholders have recently rallied around the goal of completing the Bridge to Bay Trail. About 25 miles of the proposed 54-mile trail, which would stretch along almost the entirety of the county’s eastern and southern waterfront, have been completed since the concept was first proposed in the mid-’90s. 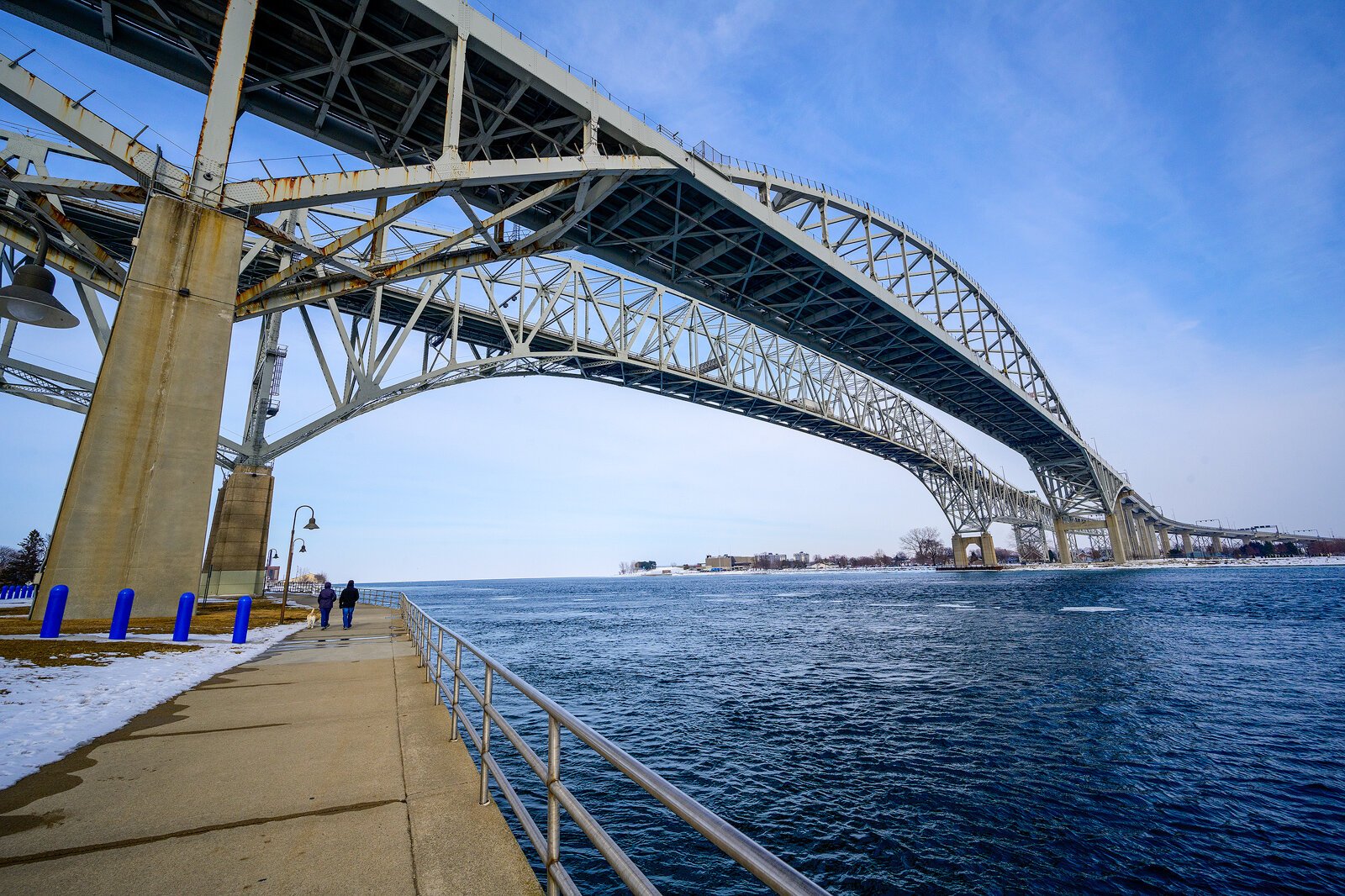 The Bridge to Bay Trail under the Blue Water Bridge in Port Huron.

In 2019 the St. Clair County Metropolitan Planning Commission released its first trails plan update since 2008, creating a master framework for completing the remaining half of the Bridge to Bay Trail. The county is also currently collaborating with Macomb County and several other partners to develop a coastal birding trail spanning both counties.

“It’s a culture of trails and bicycling and walking that’s kind of ingrained in the area up there,” he says. “That’s something we’d like to see in this area in the long term.”

“Everyone seems to agree on this”

In recent years, leaders have increasingly collaborated to envision a big, regional picture for the future of Southeast Michigan’s trails. Sanderson notes that “historically, there hasn’t been a lot of partnership and regionalism” in the area, but “everyone seems to agree on this.”

He says that’s been helped along by the Metroparks’ holistic approach to planning, as well as the Michigan Department of Natural Resources’ 2015 announcement of the Iron Belle Trail, which aims to connect Detroit to the Upper Peninsula. The Southeast Michigan Council of Governments (SEMCOG) has helped shape the regional vision through its 2014 Bicycle and Pedestrian Travel Plan, updated in 2020 as the Bicycle and Pedestrian Mobility Plan for Southeast Michigan.

In 2019, SEMCOG and the Ralph C. Wilson, Jr. Foundation took regional planning efforts to the next level. The organizations convened a group of stakeholders who are involved in planning trails and parks in St. Clair, Macomb, Oakland, Wayne, Washtenaw, Livingston, and Monroe counties. The group meets quarterly, with committees meeting more regularly to discuss mapping and planning, funding, marketing and branding, and capacity building.

“There’s always been these dividing lines, whether they’re actually municipal or they’re psychological. We have these lines and sometimes they’re hard to cross,” says Kelly, a member of the group. “But with trails, it seems as though folks are starting to come around to the idea that collaboration across those lines is possible, and it’s something that they’re starting to get excited about. So I think all of us in [the group] are trying to capitalize on that possibility for regionalism.”

Sanderson says the collaborative approach creates “interagency relationships and, quite frankly, efficiencies,” as stakeholders help each other identify new funding sources or opportunities to share resources. Struck says all seven counties are “in the same boat” and “looking at the big picture” together now.

“Ultimately, we’re all striving to make this a better region,” he says. “To have everybody on the same page and making that happen is only going to be beneficial in the long run.”

Local leaders see myriad potential benefits in their connected vision for Southeast Michigan’s trails. In St. Clair County, leaders have largely coalesced around the approach as a way to spur economic development. Randy Maiers, president and CEO of the Community Foundation of St. Clair County, says that as recent downtown developments like St. Clair’s Riverview Plaza and the renovated St. Clair Inn have played out, many local stakeholders began to ask why the Bridge to Bay Trail skirted some of the county’s downtowns instead of connecting to them. 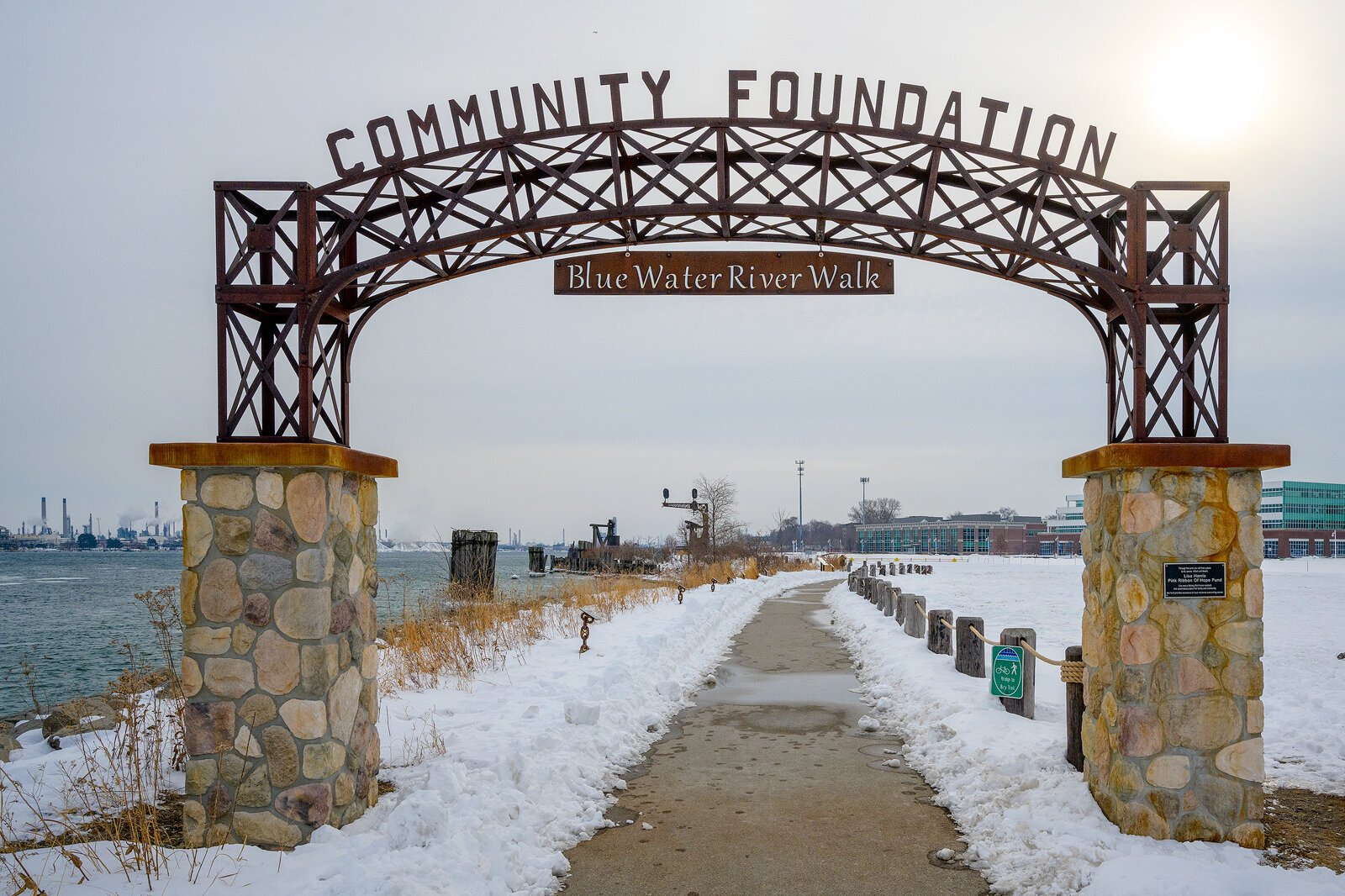 The Blue Water River Walk in Port Huron is part of the Bridge to Bay Trail.

Maiers says he and other local leaders quickly realized there was opportunity in the fact that many of the county’s downtowns are less than a 10-mile bike ride from each other.

“Few parts of Michigan have that potential to capitalize on that small-town feel,” he says. “So for us it was a matter of how we help reward investors who are investing millions of dollars in new downtown assets. One way to help reward them is to bring people to their front door and let people visit our downtowns. So for us it was purely economic development and economic prosperity.”

Maiers says St. Clair County leaders’ visits to Traverse City have helped them to recontextualize the importance of trails, as they heard stories and saw data that showed the impact that trails in that area had on small businesses. Struck says leaders now see trail planning as something that goes “beyond just recreation, which may have been the viewpoint many years ago.”

Sanderson also cites economic benefits, noting that a well-connected trail system can help to “set your community apart on the national stage” and attract “top-tier talent.” But he also notes broader social benefits that come from connecting trails through numerous communities. 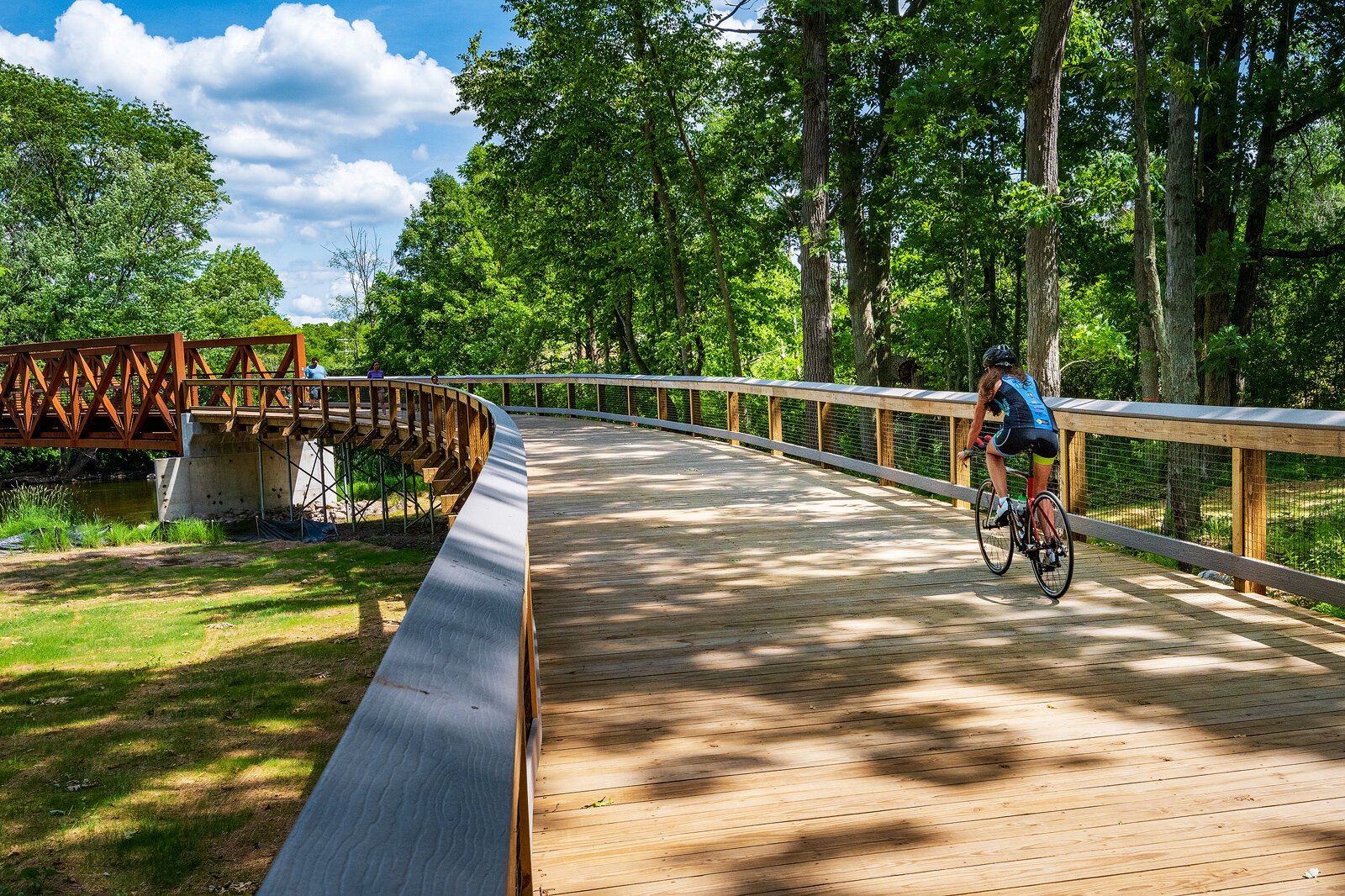 A new segment of the B2B Trail off Huron River Drive in Dexter.

“You see people that are moving outside of their normal communities,” Sanderson says. “You get a mixing of people on the trail and you see that those people are your friends and neighbors, maybe people you don’t know, but you’re all out there for the same reasons. … I think that it mixes our community in a really interesting way in a world that is set up for cars and automobiles.”

Patrick Dunn is the project editor of Inside Our Outdoors. He is also the managing editor of Concentrate and an Ann Arbor-based freelance writer and editor.

All photos by Doug Coombe.