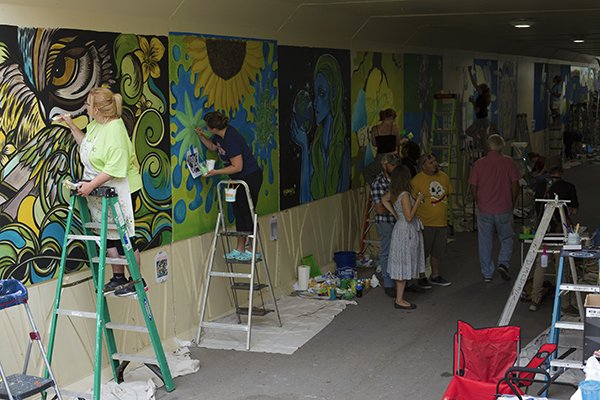 The Community Foundation saw another busy year of grantmaking throughout 2021 with more than $3.88 million awarded to various organizations and causes.

And with a top priority of discretionary dollars being Community & Economic Growth and Prosperity, it’s no surprise that over 40% of grants ($1.55M) went toward projects that will build a vibrant community for generations to come. Projects like the marina and Bridge to Bay Trail in Marine City.

“Connected trailways and waterfront utilization have been a priority of ours these past few years,” said Judge John Tomlinson, chair of the Grants Committee. “Places like Port Huron and St. Clair have already received a bit of investment, so when we had a chance to support Marine City the same way, we jumped on it.”

The City of Marine City received $45,000 to support the purchase of waterfront property along the Belle River to create a marina consisting of 600 feet of shoreline, which City officials said will generate more tourist revenue as boaters currently bypass the area because of a lack of slips and other amenities travelers can find in neighboring communities.

Marine City also received $10,000 for preliminary engineering costs to explore connecting the existing Bridge to Bay Trail to downtown and the future marina.

In addition to Community & Economic Growth and Prosperity, almost 18% was spent on another priority area – College, Career & Life Success. More than $687,000 was awarded for traditional scholarships, three Come Home Awards and to programs such as student-athlete tutoring through the Athletic Factory.

This past year, the Athletic Factory was able to help 95 students improve their grades thanks to $40,000 in grants. The organization also received another $15,000 for summer sports programming and SAT prep.

This last year also saw the return of the Big Give on June 9, which allowed the Athletic Factory and 74 other local nonprofits to participate in a massive day of giving. The last event was held in 2018.

“We know that where giving thrives communities thrive too,” Tomlinson said. “Which is why the Community Foundation and its grantmaking committees are proud to champion an event like the Big Give.”

Thanks to the Big Give, organizations with focus areas ranging from basic needs to education, arts to youth development raised more than $700,000 in 24 hours, including more than $286,000 in grants from the bonus pool, prizes and other gifts from donor advised funds.

Other grant highlights include almost 13% ($499,000) in basic needs funding such as $5,000 to support the Yale Community Food Bank and $3,000 for Julie’s Kids, which helps students at Yale Community Schools.

Another 6% ($269,000) in grants supported arts and culture, including $5,000 for the Making Muralists project which transformed the Military Street tunnel along the Blue Water River Walk.

Blue Water Arts Committee member Jody Parmann was the brainchild of the project which brought together 35 artists to be trained by local muralist David Stoneberg. The project had two goals: revitalizing the dark, graffiti-filled tunnel along the Blue Water River Walk and creating more local muralists by providing an opportunity to learn in a low-pressure environment.

Marysville Band also received a boost in 2021 with almost $15,000 in grants for new percussion harnesses and the marching band show.

“Not only did the Viking Regiment have a full, normal marching season, but after a very competitive marching season, the Marysville Viking Regiment earned State Runner-Up at Ford Field,” said Andrea Paul, former president of Marysville Band Boosters. “The show was titled ‘A Day at the Ball Park.’ We truly could not have done this without your support and willingness to put money into a show allowing us to move forward, even though we didn’t know what COVID would bring. The memories made for the band members, leaders, parents and our community are priceless!”