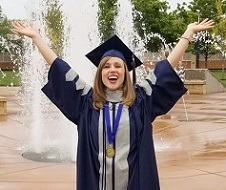 Financial advisor Will Metzner and chiropractor Courtney Pesta join the ranks of Come Home award recipients with a combined $20,000 awarded.

Metzner and his fiancée recently bought a home in St. Clair, where they have both previously lived, although Metzner is originally from the south. He was offered a $15,000 Come Home Award this summer courtesy of a grant from our St. Clair based funds.

He works at the newly established Optimus Financial alongside his brother in Port Huron.

“I want to make sure the people I work with are financially prepared and feel confident about their retirement,” Metzner said. “To do this to the best of my ability, I will be pursuing my Certified Financial Planner designation at the start of 2020.”

He returns to the area from Atlanta, Georgia, where he worked in investment banking at Suntrust Robinson Humphrey. Metzner has also worked for Stifel Nicolaus in his birth state of Missouri.

“Beyond the sentimentality we both have for the area, there is great opportunity for my family in Port Huron which is why we have decided to make the move back to our home roots,” he said.

Pesta also has ties to Missouri as she earned her bachelor’s degree in life sciences and doctorate of chiropractic from Logan University. She was offered $5,000 from our Come Home Award fund this spring.

A former long-time area resident, she is back in Port Huron and works at Lakeview Chiropractic.

“It’s where I grew up surrounded by family, where I fell in love, and where I found my lifelong passion for gymnastics where I learned, over the years, to believe in myself, push past my fears, and never give up on my dreams,” Pesta said.

The Come Home Award is a talent retention program that pays students on the back-end of their college career, after they have completed a degree in a STEAM related field, but only if they agree to move back home and work within the St. Clair County.

Since 2016, this program has helped 16 college graduates pay off $123,000 in student debt as they pursue local careers and make homes in the county.

The Come Home program is currently seeking applicants interested in living in the City of Port Huron, the City of St. Clair or surrounding area, or working as non-physician staff at McLaren Port Huron Hospital.