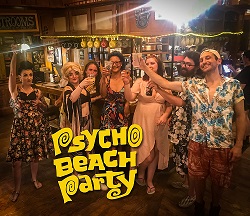 Fringe Collective Kinetic Theatre’s Summer 2021 Theatre, Music and Arts Festival kicked off this past weekend, thanks to a $16,000 grant from the Blue Water Arts Committee (BWAC).

“This truly is an exciting opportunity for our community,” said BWAC Chair Tom Walker.

The BWAC was excited to support Fringe’s idea of an outdoor, interactive theater festival. After the effects of COVID put a halt on local theater performances, they were eager for an opportunity for the community to connect with the arts again.

“The performing arts provide an essential outlet for artists and the public to communicate and express themselves,” said Walker.

The Committee was able to support the four-weekend long festival with funding from the Charles and Margaret Anderson Endowment Fund. The fund was established in 1994 by Charles, a well-known soloist, and his wife Margaret, an accomplished pianist, who were great supporters of the arts. The fund has granted over $1.2 million over the years, providing support to arts and culture related programs, organizations and events.

Read more below from the Fringe Collective Theatre article found on the Times Herald website:

After more than a year of work and a $16,000 grant, an original musical will premiere in an open-air theater in downtown Port Huron Friday.

The musical and its venue have been spearheaded by three brothers, all of whom are involved in theater.

The oldest, Scott Dambacher of Port Huron, is a writer, performer and director. The middle brother, Dave Dambacher of St. Clair, is a composer and musician. And the youngest, Brian Dambacher of Detroit, designed the theater that sits behind Raven Café.

The brothers, along with Port Huron residents Tyler Gates and Sadaat Hossain, have all been “working their butts off” to get ready for two productions: horror comedy “Psycho Beach Party” and original musical “FREE: The 21st Century Peace-Rock Piece.”

The show dates and times are as follows:

The productions are part of Fringe Collective Kinetic Theatre’s Summer 2021 Theatre, Music and Arts Festival, which Dave and Scott Dambacher are involved in.

“There’s no shortage of live performances in town for the next few weeks,” Scott Dambacher said.

He described “Psycho Beach Party” as a “classic Charles Busch comedy,” while “FREE” is like “Rent” or “Hairspray” for the millennial generation.

Hossain said “FREE” has 36 songs, with almost every musical genre represented. It’s for the “disenfranchised youth of today,” he said.

“Hopefully we do it justice,” Scott Dambacher said.

The men received a $16,000 grant from the Community Foundation of St. Clair County to put on the shows, half of which is being used to pay the local actors, musicians and technicians.

The local talent includes the brothers, who have worked together on productions since the ’90s.

Dave Dambacher does marketing work and worked with Hossain to write the music for “FREE.” He said he first fell in love with theater while working as the assistant stage manager on a production of “Jesus Christ Superstar” at Macomb Community College.

He loved the process, how it worked – it’s music, acting, visual arts, all coming together in a certain way to make the show happen.

Brian Dambacher is in freelance theatrical design and is the production manager for Purple Rose Theatre Company in Chelsea. He has a Bachelor of Arts and a Master of Fine Arts in theatrical production.

He said he fell in love with theater while watching a production of “Richard III” and was blown away. During his senior year at Oakland University he changed his major from biomedical science to theater.

“How stupid is that?” he joked.

Scott Dambacher, a server at Raven Café who has a master’s degree in theater and has taught theater at St. Clair County Community College, said it was also a Shakespeare play that got him hooked.https://bbcea1bd90c7f17bf4d261f0c788a110.safeframe.googlesyndication.com/safeframe/1-0-38/html/container.html

Although it can be stressful working with each other, the brothers all have their own art form to make the full production picture.

“So I think that helps,” Scott Dambacher said. “Three pieces of the theatrical puzzle.”

Get the Daily Briefing newsletter in your inbox.

Start your day with the morning’s top newsDelivery: DailyYour Email

The brothers were left with a void when the theater world was shut down during the Covid-19 pandemic. Scott Dambacher said the company had rented The Citadel Stage in April 2020 for shows which eventually had to be canceled.

So when they realized they could work together safely, create a “COVID pod” to work on the show Wednesday nights at Scott Dambacher’s home, they did, and “FREE” became their “COVID project.”

And after more than a year of working on it, they’re still laughing at the material, so “there’s something there,” Scott Dambacher said.

Dave Dambacher said he wants people to feel moved and personally touched when watching the shows.

Gates wants people to get another message after watching “FREE.”