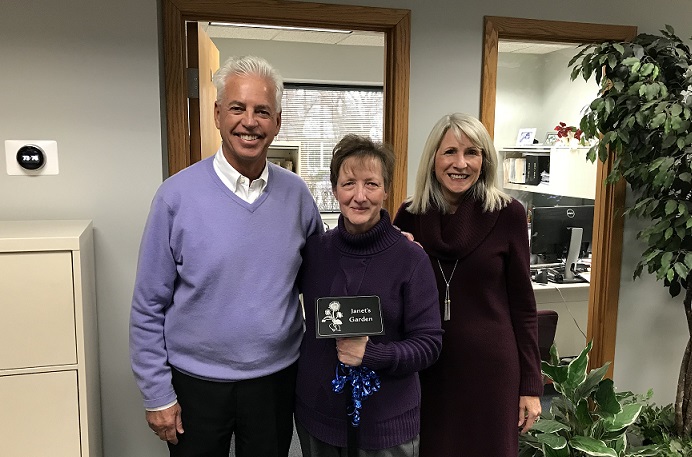 The Foundation received a donation of $5,000 from All Star Services in memory of Janet Jurnis, All Star’s former VP of Finance, who passed away earlier this year.

The funds came about from All Star winning $2,500 from LightSpeed Automation as a runner-up for their Warehouse of the Year award. All Star Services was a top three finalist out of 29 national nominees rated on warehouse efficiency. All Star then matched the funds from the award, which were to be used for charity.

Janet was a treasured employee and her loss greatly impacted the All Star Services family. Duncan Smith, President /COO, said:
“Janet was a committed employee and loved coming to work and always decorated her office for the season.  She was the most detail-oriented employee All Star has ever had.  No matter the employee or the question, she always dropped what she was doing to help.

She loved to talk about her garden, planting until dark and moving perennials from one bed to another.  She loved weekends with her family on her brother’s boat, talking about camping with her nieces and nephews and traveling with extended family.

Janet had a great sense of humor, loved her dog and was always game for a fruity drink and watching her beloved Detroit Tigers.  Janet didn’t like to cook, but always volunteered her husband to cook her company potluck dishes.  Probably, she was most proud of her son, and right before she passed away she became a grandmother for the first time.”

Smith said the company chose to honor her with this charitable gift because “her sudden passing left a void in our company and our hearts.  We wanted to do something to remember her.”

Janet was a long-time Algonac resident, so the funds were designated to benefit beautification/gardening in that area. All Star’s thoughtful and generous gift will honor Janet’s life and be enjoyed by residents for years to come.