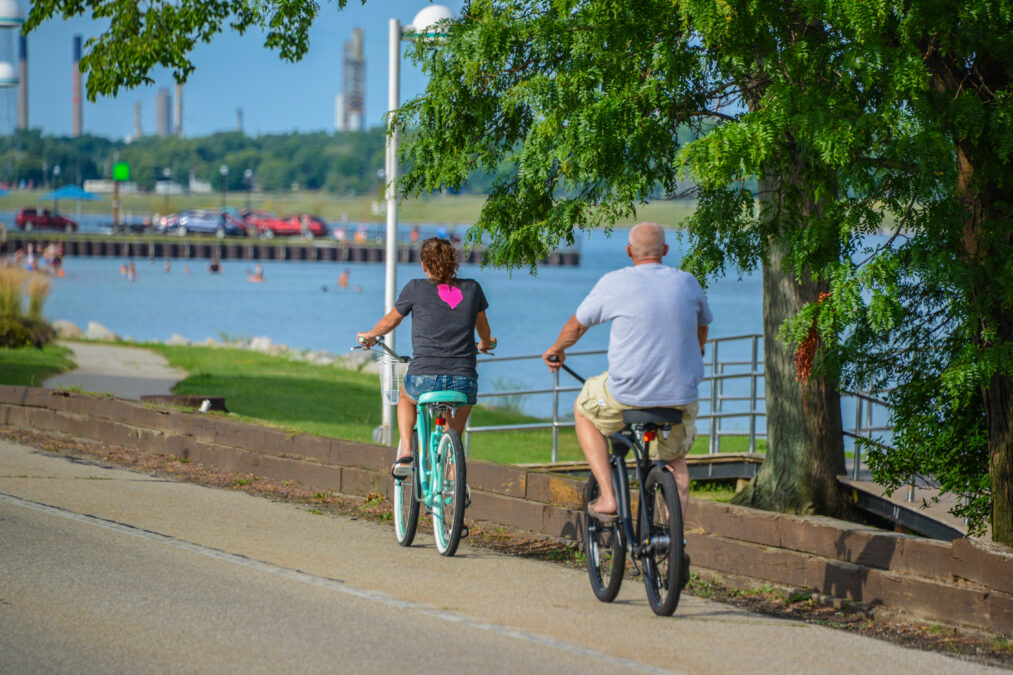 Regional stakeholders have recently received over $1.9 million in grants to boost the Phase One efforts of local organizations working to complete the 54 mile Bridge to Bay (B2B) Trail system in St. Clair County.

Led by two Ralph C. Wilson Jr. Foundation grants of $1.55 million for trails, along with $275,000 for renovations to Lighthouse Park and trailhead, the new funding provides a major spark for regional efforts.   Funding also included $147,500 in a trails maintenance grant from the Community Foundation for Southeast Michigan.

A coalition of local stakeholders including the Community Foundation of St. Clair County, St. Clair County Parks & Recreation, St. Clair County Metropolitan Planning Commission, Friends of the St. Clair River and several local municipalities have been working together since 2018 formulating a plan to address the major remaining gaps in the B2B Trail.

“This is a tremendous boost to our regional efforts,” said Randy Maiers, president & CEO of the Community Foundation of St. Clair County, which is the fiduciary of the grant funding.  “Both our Blue Meets Green coalition and our Community Foundation recognize the Bridge to Bay Trail system as one of the critical projects our region needs to complete.”

The Ralph C. Wilson, Jr. Foundation began operations in 2015 to carry on the legacy of its founder and namesake.  The foundation focuses on the regions of Western New York and Southeast Michigan, including St. Clair County.

“Parks and trails add greatly to the quality of life in a community,” said J.J. Tighe, director of Parks & Trails Initiative for the Ralph C. Wilson Jr. Foundation.   “We are impressed with the collaborative and comprehensive model which has been put together up in the ‘Thumb Coast’ and believe their long-term vision and plans warrant such a large early commitment from our Foundation.”

“Our Regional Trails Governing Board is working on a multi-year plan to connect and complete all of the gaps within the Bridge to Bay Trail system,” said Sheri Faust, Chair of the Regional Trails Board.   Faust added that the Regional Trails board has been working with trail communities up and down the St. Clair River to seek community input, finalize routes and begin the complicated search for additional grant funding.

Phase One projects include key trail gaps in St. Clair, Marysville and Port Huron which are projected to cost $4.6 million in total.   One key highlight in Phase One includes plans for a new pedestrian bridge over the Black River Canal to connect the school campuses of Port Huron Northern and Holland Woods Middle School.   “That’s a really exciting part of this phase,” added Maiers.   “A new trail running along the length of the canal would connect hundreds of families to the parks and shoreline along Lake Huron.”

The Bridge to Bay Trail concept began in the early 1990’s and stretches from Lakeport State Park on the north, to Anchor Bay along the shores of Lake St. Clair on the south.    In 2018 a coalition of stakeholders began exploring the opportunities to utilize the region’s trail systems to better connect the downtowns and key waterfront assets throughout the Blue Water Region.

The Ralph C. Wilson Jr. Trails Maintenance Fund was established with a $10 million gift in 2018 to the Community Foundation for Southeast Michigan.  The goal of the fund is to provide maintenance support to already developed trails and greenways throughout Southeast Michigan.   This $147,500 grant requires a dollar-for-dollar match and will be allocated as follows;